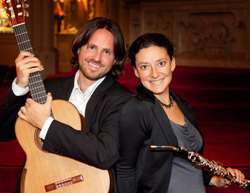 Zoco Duo is an exciting ensemble in which Jacob Cordover (Spain/Australia) and Laura Karney (Spain/USA) bring together the diverse elements of the oboe/English horn and guitar. Zoco Duo has been heard in concert through Australia, North America and Europe.

The Spanish derivative of the Arabic world for market, a zoco was a place where a myriad of sights, sounds, smells, and tastes of the exotic mingled. It is in this spirit that the oboe/English horn and the guitar come together, merging their individual sounds to play an eclectic mix of musical styles. From Baroque to Romantic, Classical to Contemporary, European to the Americas, Zoco Duo creates an experience full of exotic sounds, musical textures and atmospheres.
They pair met whilst Artists in Residence at the Banff Centre for the Arts in Canada and in this setting they first performed together. Intrigued and surprised by the beauty created when the sounds of their instruments blended Jacob and Laura decided to form a duo.  Unperturbed by the scarcity of repertoire originally written for this combination of instruments, Zoco Duo began collecting repertoire in Banff and since then have discovered a plethora of works that suit the combination of sounds beautifully.  As there is little original repertoire for this unique pair, many of the arrangements have been done by the duo themselves. Their belief in the continuing development of classical music has lead Zoco Duo to commission and premiere several works by both up and coming and well established composers.

Over the years, Jacob and Laura have expanded this concept to include performances with other instrumentalists. As Zoco Ensemble they have performed in trios with piano (Sarah Hagen, Canada), cello (Hannah Addario-Berry, USA/Canada), voice (Julia Madden, USA) and in larger chamber ensembles with a variety of instruments. Zoco Duo has also work closely with specialist Carlo Barone on the historically informed style and performance practice of early 19th Century music. Through their performances of this repertoire on original period instruments, audiences have been able to rediscover the excitement and drama of music inspired by Italian Opera.