In the years since that first agreement in the Spring of 2005 to pursue the vision in cooperation with Bamfield Marine Sciences Centre, Music by the Sea has grown quickly. Here is a short history: 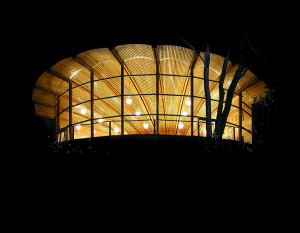 • In 2005 BMSC entered into a partnership with Founding Director Donison to pursue the vision. In June 2005 the plans were announced at the opening ceremony of the Rix Centre and Donison’s concert Steinway piano was transported to Bamfield where it has since resided in the Rix Centre.

• The summer of 2005 was spent by Director Donison getting to know the community and evaluating the potential support and feasibility for the project.

• In January of 2006,  as part of the 100 year anniversary event commemorating the sinking of the Valencia, the first MBTS concert occurred,  featuring performances by Nick Jacques, Sarah Hagen, Michael Waters, and Donison in a jazz trio with Sean Drabitt and Josh Dixon.

• After unsuccessful attempts throughout the winter of 2005-06 to raise money for the project,  a trial run of one weekend of 4 concerts in July of 2006 was an artistic and organizational success.  A budget of  $20,000 was achieved. In what had been a flurry of activity for the two months from May 20th to July 20th,  posters, brochures, a logo, house programmes, MBTS merchandise, sponsors, and a programme and roster of artists was achieved.   This first season included a stellar lineup of artists, a visiting BC LG in the person of the Honourable Iona Campagnolo to launch the festival, and the energy of magic in the making……  It was truly and inspiring time and everyone went away feeling something significant had occurred.

• Following this successful opening season in 2006-07, MBTS achieved a favourable reaction from the Rix Foundation and a grant of $25,000 was made to begin to pursue the vision. We became a registered Society on November 22nd, 2006 became a Charity, and began our first official season as a non-profit Society. We underwent organizational growth, expanded our summer season by the number of concerts, artists and fees,  and expanded our artistic scope and strength. The vision as contemplated was received warmly from government but funds were not forth-coming and we were locked into a much more painful and slower growth curve than had been hoped for. Our first awareness-raising event at Illahie in May, 2007  accomplished the mission of bringing the project to the attention of some important supporters. A $90,000 balanced budget was achieved for the year. The summer season was expanded to include a wider selection of artists, their fees were increased, and some paid accommodation provided, float –plane packages,  and new sponsors were just some of the advancements we made.

• In 2007-08 MBTS implemented its first “performance-residency”, made possible by a grant from the Vancouver Foundation and tremendous community support from Bamfield. In addition we were finally successful in some funding applications.  The Vancouver Foundation provided a grant of $15,000 and the Alberni-Clayoquot Regional Government provided  $2,000.00   On August 24th Director Donison was able to write what is the 2008 report  The first annual report was created in 2009 for the 2008 season. 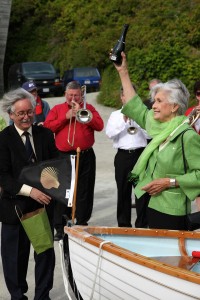 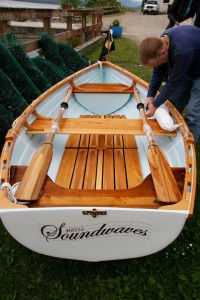 • In 2008-09 MBTS took on an even more ambitious season with the inclusion of two ‘off-season’ concerts in October and in February.  These concerts brought to the community a welcome infusion of cultural life in the darker winter months.  In July 9th to 19th, 2009,  MBTS undertook its second ‘performance residency’,  with an even more impressive array of artists than ever before. An additional surge in fund-raising launched by MBTS Honourary Director the Honourable Iona V. Campagnolo entitled Iona’s Challenge,   was extremely successful and enabled us to claim a successful year in financial terms in the 2009 report.  2009 also saw the christening of MBTS’s first ocean vessel  MBTSS Soundwaves.  Theceremonial rowboat newly restored by Pamela Day and donated by her and her husband MBTS Director David Whitworth, was christened by Iona Campagnolo and accompanied by a  Ceremonial Fanfare performed by True North Brass, from Toronto , Ontario.

The 2010 annual report outlines the five goals that were established and met for 2010:
• establishing the goal of a stronger fiscal position as a priority;
• increasing revenues through more fund-raising activities and more focused government relations;
• continued unrelenting adherence to artistic excellence;
• achieving some national media recognition;
• concentrating on building organizational structure, beginning with a permanent year-round administrative presence in Bamfield.

• 2010 will be seen as the year that MBTS finally turned the corner toward permanence and sustainability. We established a permanent presence in Bamfield at the Bamfield Marine Sciences Centre with a year-round office,  and the level of cooperation between the two organizations took on a new level of integration and planning.   BMSC continues to be our strongest sponsor and partnering organization and we extend our utmost appreciation and gratitude to the current leadership and staff at BMSC for their on-going commitment to Music by the Sea.   BMSC is operated by a consortium including Simon Fraser University, the University of Alberta, the University of British Columbia, the University of Calgary, and the University of Victoria.

• In 2011 planning began in earnest  toward launching our first educational programme in Bamfield at MBTS for the summer of 2012.  This is the much anticipated time when MBTS can begin to realize the portion of its mandate which is devoted to education.  In the meantime,  the festival roared ahead in 2011 with a more exciting programme than ever.

• In 2013 MBTS began planning its 9th season in 2014 as well as its third year of  the Mentoring School’s Fellowship Artists headed up by Steven Dann.  At the same time discussion has begun about the tenth anniversary coming up in 2015!

Music-by-the-Sea has already become a place for a life-changing experience, where the most promising talented young musicians from around the world have the opportunity to study and perform with some of the world’s finest musicians in a natural setting that has no equal: the bold beauty of the west coast of Canada’s Vancouver Island in the Pacific Rim National Park. During a concentrated period during the summer, musicians take in the powerful inspiration this stunning part of the world elicits. It focuses the muse.

A current MBTS artist from Toronto (to remain un-named) recently exclaimed:  “I would walk all the way from Toronto to Bamfield to be at MBTS!”  We think we are succeeding at creating the place envisioned in the paragraph above!