We are pleased to announce that MBTS now has a Huu-ay-aht First Nation (HFN) member on our Board. He is Charlie Clappis, and is an Honouary MBTS Director.

In particular,  this year,  Music by the Sea and the HFN will present a joint event in the House of Huu-ay-aht at noon on July 6th.  It will be a luncheon followed by a Music Circle — an event which will be free to the public to take part as either performers or audience.  There will be an appropriate ticket price for the luncheon portion of the event.  This event will be a part of our Community Day,  an outreach event which also includes a free evening concert ( 8:00pm) at the Rix Centre for Ocean Discoveries in Bamfield. Save On Foods is the Community Day Sponsor and will be providing goodies to eat for all!

Music-by-the- Sea is honoured to be performing in the traditional territory of the Huu-ay-aht First Nation, part of the Nuu-chah-nulth speaking First Nations ( formerly known as Nootka ) who have flourished for thousands of years on this segment of the Pacific coastline of Vancouver Island.

The traditional territories of the Huu-ay-aht First Nations encompass some of the richest portions of this remarkable environment. Islands, bays, beaches, streams, rivers, and vast forests, hills and mountains all form part of this remarkable landscape. Huu-ay-aht ancestors lived in close harmony with nature and drew all they required for living from what nature provides. The Huu-ay-aht today continue to believe in a close relationship between the spiritual and natural worlds.

From time immemorial the ocean supplied halibut, cod, snapper, herring and other fish, as well as seals, sea lions and whales. When the tide was low, mussels, clams, chitons, urchins and more would be collected and eaten. On land, many plant foods, including a wide variety of berries would ripen and be gathered. From the Summer through late Fall, five species of Pacific salmon returned to their spawning rivers, where the Huu-ay-aht people went to the rivers to catch, smoke and dry the fish in preparation for the coming Winter. Throughout the year, land mammals, including elk, deer and bear, were hunted for their meat and fur.

It’s hardly surprising that this unique environment is reflected in art and music. First Nations music from the West coast is replete with all types of songs lullabies, bear songs, individual power songs, doctoring songs, comic songs, dance songs, stick-game songs, sweathouse songs, many of which have been collected by ethnomusicologists.

The Huu-ay-aht First nation took part in the festival by providing three events which were in celebration of British Columbia’s 150 years as a Crown Colony, by showing in real and symbolic ways the spirit of cooperation which has characterized our people through those generations.

Huulthhiilth – dancing in song and dance;
Huu-ay-aht Welcome song;
Haaculthaa – special songs from the chiefs, this will be done in honour and recognition of the visitors to the Hawiih’s Hahoulthee (Hereditary Chief’s territory); 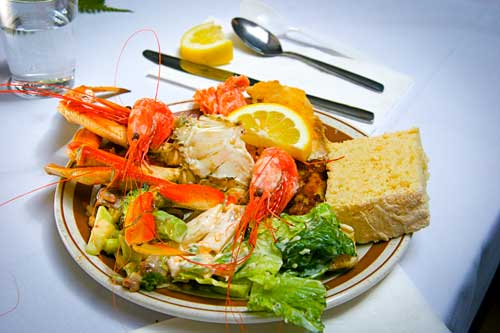 The Seafood Buffet will include:

Music Performance and Presentation: Opening the Creative Floodgates
This was in the House of Huu-ay-aht on July 16th at 7:00 Pm and was open to the public by donation. Michael Waters will performed his unique approach to guitar music and discussed spirit and creativity, and the techniques and experiences that led to his extraordinary wave of virtuoso composition following 33 years of preparation.

Interpretive Huu-ay-aht guided traditional Dug-Out Canoe tours
On July 16th from 1:00 to 4:00 pm the Huu-ay-aht provided for attendees of the festival and others guided tours in two Traditional Dug Out canoes. This was powerful symbolism of our choice to offer the invitation to other peoples to “get in the canoe” with us, as we move forward in our post-treaty world of activities, commerce, and sharing. This was a perfect symbol to celebrate 150 years of living beside other British Columbians and sharing our traditional lands with them in a spirit of cooperation.