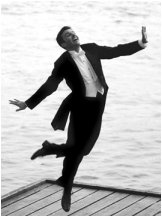 William Orlowski is one of the greatest tap dancers Canada has ever produced, not to mention an award-winning choreographer! Orlowski has won two Dora Mavor Moore Awards for Outstanding Choreography in a Musical Dames at Sea, That Scatterbrain Booky and was assistant choreographer for the Paramount Pictures feature film, Stepping Out, starring Liza Minnelli. He is featured in a tap dance short aired on TVO and was seen on CBC in Cynthia! as special guest and tap choreographer.

He has also appeared on television in such acclaimed works as the CBC’s award-winning documentary, Dance Makes Waves, and All That Bach which was nominated for an Emmy award. He created special choreography for Ginger Rogers in the television series The Palace Presents hosted by Jack Jones.

William Orlowski co-founded the National Tap Dance Company of Canada in 1977 and for 27 years has been it’s Artistic Director and Resident Choreographer. He has created over thirty works for the company: among them, The Tin Soldier, Oliver Button is a Sissy, The Hound of the Baskervilles, and Brandenburg Concerto #3. His Artistic Direction of the company lead to performances in China, Hong Kong, Bermuda, the Festival of Two Worlds in Spoleto, Italy and the Kennedy Center in Washington.

William Orlowski has appeared throughout North America as a Guest Artist with symphony orchestras. Most recently he has appeared with the Hamilton Philharmonic Orchestra, Colorado Symphony, the Kingston, London, Kitchener-Waterloo, Windsor, Winnipeg, Quebec City and Vancouver Symphony Orchestras.