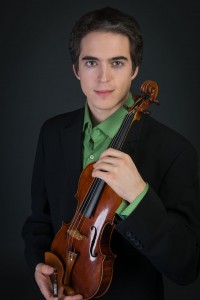 Victor Fournelle-Blain has soloed with Orchestre Métropolitain (Montréal), Orchestre Symphonique de Trois-Rivières, Orchestre des Jeunes de Montréal and Orchestre Symphonique du Conservatoire de Montréal. An active chamber musician, he regularly collaborates with renowned musicians and ensembles, and has toured across Canada and South America with the Parcival ensemble. Victor joined the viola section of Orchestre Symphonique de Montréal in the fall of 2014. Having received his Master of Music from Yale School of Music in 2013, where he studied with prof. Ani Kavafian, Victor graduated in 2015 from McGill’s Schulich School of Music with an Artist Diploma in violin and viola with prof. André Roy. He also studied at the Conservatoire de Musique de Montréal in Johanne Arel’s studio, receiving the Great Distinction in 2011 for his Concours, both in violin and chamber music. He has also received grants from the McAbbie and Hnatyshyn foundations. Victor is grateful to Canimex, Qc, Canada, for the generous loan of a G.F. Pressenda violin and a Sartory bow.