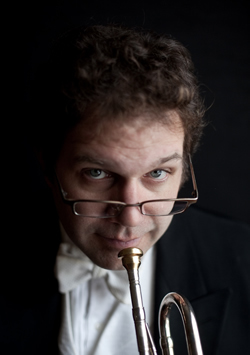 Shawn Spicer is originally from Nova Scotia and now calls London Ontario home.  His early musical life was busy playing with the Nova Scotia Youth Orchestra, the Chester Brass Band, the Acadia University Concert Band and a multitude of school ensembles.  His early teachers include Frank Ridgeway, Jeff Thompson, Jeffrey Stern and Gordon McGowan.  Shawn has degrees from McGill and Yale universities and is currently working towards a doctorate at the University of Toronto.  Some of Shawn’s other influential teachers include James Thompson, D. Payson Sturdevant, Alan Dean and Jeffrey Reynolds.

Shawn has worked in musical organizations across much of Canada from Symphony Nova Scotia to the Calgary based Foothills Brass Quintet.

In 1999 Shawn was appointed principal trumpet of Orchestra London Canada.  Shawn also performs regularly as a musician at the Stratford Shakespearian Festival.  As a soloist over the last few years Shawn has played a wide variety of concertos and solo works by Haydn, Hetu, Ligeti, Bennett and Bach.

Shawn loves to play baroque and renaissance music on original instruments.  Performances on baroque trumpet and cornetto have taken him as far away as Japan and Brazil.  He has played with Taffelmusik, Studio de Musique Ancienne de Montreal, the Toronto Consort, the Toronto Masque Theatre, the Sante Fe Early Music Society and the Theatro Municipale do Rio de Janeiro.

Shawn is also active as an educator.  He was trumpet instructor at the Canadian Forces School of Music in Borden Ontario from 1991-1998 and since 2003 Shawn has taught trumpet at the University of Western Ontario.

Shawn is very proud to be a Yamaha artist as well as a Wedge Mouthpiece artist.