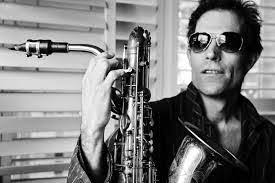 Perry’s expressive tone and lyrical approach to playing the entire family of saxophones have kept him busy performing in Canada and around the world for over four decades. Born in Vancouver BC, he starting playing in local coffee houses and bars at the age of 15, soon hooking up with Canadian jazz greats¬to¬be including Hugh Fraser, Campbell Ryga and Renee Rosnes. Developing his own sound which he describes as being “steeped in the tradition of jazz and charged with the energy and experimentation of modern music”. Moving to Toronto in the ‘80s, he has had the opportunity to perform and record with a wide spectrum of artists including Dave Young , Hugh Fraser’s Veji Band, Hilario Duran, The Shuffle Demons, Neil Swainson/Rob Piltch Trio, Holly Cole, Brian Dikenson Big Band, Aretha Franklin , David Foster, Freddie Stone, Claude Ranger, John Macleod Big Band , The Count Basie Orchestra, Kevin Breit and The Sisters Uclid , The Oscar Peterson Festival Big Band, The Esprit Orchestra, The Boss Brass and The Toronto Symphony and many others.