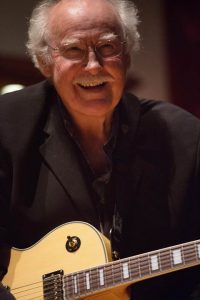 Jazz guitarist, Oliver Gannon, has been very active in the Vancouver and Canadian jazz scenes since the early 1970’s. In 2003, Oliver was elected ‘Jazz Guitarist of the Year’ by the Canadian Jazz Awards. He has performed at many of the major jazz festivals in Europe and North America and has made three concert tours of the former USSR. He has performed on many jazz records, including four on the Concord label. A duo album recorded in 1982 with long standing colleague, tenor saxophonist Fraser MacPherson, won the Juno Award (the Canadian Grammy) for best jazz album. More recently he performs with the Oliver Gannon Qt., the Ian McDougall Sextet, Two Much Guitar (Qt. with Bill Coon), The Cory Weeds Qt. and others.

With Donnie Clark: To Swing or not to Swing The Donnie Clark Quintet, Silver Lake Records (2002)

Also albums with Pacific Salt and others.

Oliver has been a major contributor to the “Band-in-a-Box” music accompaniment program (www.pgmusic.com) owned by his brother, Dr. Peter Gannon.