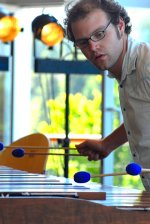 A remarkably versatile percussionist, Nicholas Jacques performs as soloist, orchestral musician, and chamber musician. His interests include everything from classical to contemporary music, and from African to pop. A native of Edmonton, Alberta, Nicholas’ formal percussion training began at the University of Alberta with Brian Jones, and continued at McGill University with D’Arcy Grey and Aundri Malchenko. Nicholas has recently finished his masters of percussion performance at the University of British Columbia studying with Vern Griffits. Nicholas has performed with ensembles such as the Edmonton Symphony Orchestra, the Banff Festival Orchestra, and Tommy Banks Big Band. He has held the position of principal percussion with the University of Alberta Wind Ensemble and Symphony Orchestra for three consecutive seasons as well as the McGill Wind Symphony for one season. Nicholas has studied marimba in New Jersey with Leigh Howard Stevens as well as with She-e Wu.

Along side an aspiring career in contemporary percussion performance Nicholas has appeared on stage throughout Canada with artists such as Jens Lindemann, Alain Trudel, Jeffery Goldberg, Rod Thomas Squance, Aiyun Huang, Michael Burrit and Hugh Fraser. His performances have been broadcasted on CBC Radio One and appear on a compilation CD of Canadian Contemporary music alongside pianist Cheryl Cooney. Nicholas devotes much of his time teaching clinics and giving master classes to youth orchestras and young performers, striving to provide the fundamental music skills to upcoming performers.