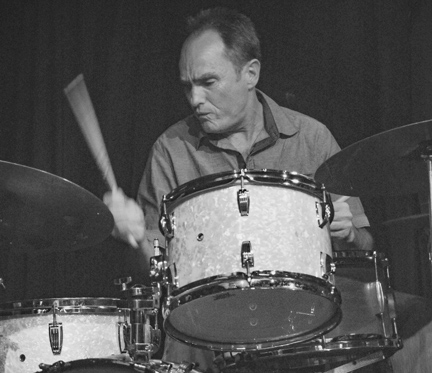 Nels Guloien began drumming at the age of 15 years old, encouraged by both his musician father, Paul Perry (Guloien) and his older brother, PJ Perry. His musical family has remained a great influence throughout his life. His first city band experience came in the form of a guitar trio, led by guitarist singer, Scott Jarrett.

At the age of 18, along with two musician friends from Vancouver, he traveled to New York to attend the Karl Berger Creative Music Studio.

Since returning to Vancouver, he has performed with a wide variety of musicians. Both for commercial music, and in the jazz scene. Nels has performed on the drums with well known musicians like Bob Murphy, Hugh Fraser, Michael Guild, Gavin Walker, William Taylor, PJ Perry, Bill Ames, “Air Show” and “Out of the Blue”.

Always inspired by the beat and rhythm, Nels has continued to learn different styles, drumming patterns and techniques. You can catch Nels playing around Vancouver and in music festivals.