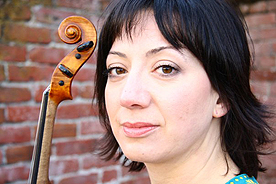 Müge Büyükçelen was born in 1975 in Istanbul, Turkey, where she began playing music at the age of nine. She studied at the Istanbul State Conservatory, where her natural talent was quickly recaognized and she was awarded the “Best Young Musician” Award. She studied privately with Nicolai Chumacenko, Sandra Goldberg, Ayla Erduran, and Burkhard Godhoff.

Müge holds a Masters degree in music performance from Bilkent University in Ankara, Turkey, and an Associate Teaching Diploma from the Victoria Conservatory of Music. She has taught and performed at the Toulouse National Conservatory  and is a former member of both the Bilkent Symphony Orchestra and the Toulouse Chamber Orchestra. She has won numerous awards, including first prize at the Violin Competition of the Turkish Cultural Ministry and first prize for the Best Interpreter of Turkish Composers. Over the past several years she has traveled to Stanford University on scholarship to study string quartet repertoire with the St. Lawrence String Quartet.

Ms. Büyükçelen has been a featured soloist with numerous orchestras, performing in France, Switzerland, Italy, Turkey, North America, Costa Rica, Oman and Bahrain. In 2006 Müge was a featured soloist with the Bilkent Symphony Orchestra under the direction of Martin Fischer-Dieskau, where she performed the Barber concerto for violin. In 2007 she completed concert tours in Turkey with the Emily Carr String Quartet and in eastern Canada and the United States with the Aventa Ensemble. She is currently a violin instructor at the Victoria Conservatory of Music and a member of the Victoria Symphony Orchestra, the Aventa Ensemble, the Goolden Trio, and the Galiano Ensemble.