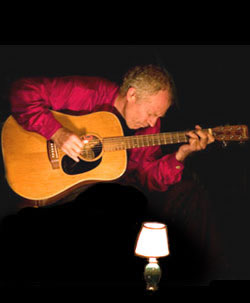 Michael was born and raised in a remote logging and fishing village in the coastal forest of Vancouver Island, British Columbia.

In his twenties he chose to approach music as a spiritual practice, and spent ten years travelling through Europe, Africa and North America, learning from both indigenous and western cultures. He was deeply influenced by the noted surrealist Alexandro Jodorowski, with a focus on reaching an inner balance using very old teachings from western culture. In 1983 he was a co-founder of Hollyhock, now Canada’s largest holistic retreat centre, on the coast of Brithish Columbia.

In the early 1990’s, after twenty years of playing, he composed his first two instrumental pieces. Another thirteen years passed (with no new compositions) until 2004, when his encounter with the traditional medicine ceremonies of the Amazon triggered a complete shift in approach, and the beginning of continual composition.

The experience also compelled him to begin playing publicly, and since 2005 he has performed in Africa, Europe and Canada, and recently completed a tour with the Ugandan World music star Kinobe and Cirque du Soliel vocalist Gina Sala. There is no genre that describes his compositions, but the closest might be Acoustic Psychedelic Chill.

Michael approaches playing music primarily as a spiritual practice, which he describes as being different only in that the artistry takes place in a personal context that includes “from before you were born, until after you die” .