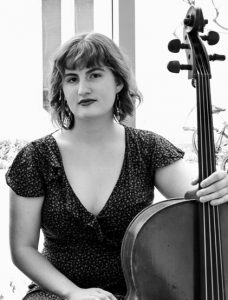 Originally from Bellingham, Washington, cellist Maya Enstad currently studies with Amir Eldan at the Oberlin Conservatory of Music and will graduate in 2020. She won first place in the Ethel Crook String Competition for two consecutive years in 2014 and 2015, and was awarded a fellowship position at the Marrowstone Music Festival in 2017. In 2018, she performed as a fellow at the CREDO Summer Music Festival alongside her Oberlin-based string quartet, the Cornell Quartet. She has also participated in acclaimed festivals such as Orford Musique, the Academy at Domaine Forget in Quebec, and ENCORE Chamber Music. An avid teacher, Maya maintains a small private studio in Oberlin, and has taught at the Asociación Nacional de Conciertos in Panama City, Panama. In addition to cello, Maya loves Haydn quartets, her dog, and Ohio sunsets. She plays on a 1894 Carl Zach cello, generously loaned to her by the Carlsen Cello Foundation.