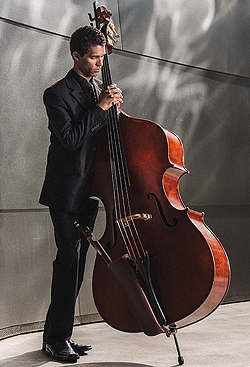 At the age of 21, Marlon Martinez is a versatile double bassist. Growing up in Southern California, he is currently a Bachelor’s degree candidate at the Colburn Conservatory of Music in Los Angeles, where he studies with Peter Lloyd. An avid orchestral musician, Marlon has performed for conductors such as Yehuda Gilad, Gerard Schwarz, Bramwell Tovey, James Conlon, Giancarlo Guerrero, Sir Neville Marriner and Gustavo Dudamel. He serves as the co-principal bassist of the American Youth Symphony orchestra conducted by maestro Alexander Treger, and is a substitute bassist for the San Diego Symphony Orchestra.

In 2010, Marlon was chosen to participate in the highly selective Verbier Festival Orchestra in Switzerland. During his two-year summer membership he performed under the baton of Charles Dutoit, Valery Gergiev, Neeme Järvi, Rafael Frühbeck de Burgos and Yuri Temirkanov among others, and soloists such as Mischa Maisky, Lisa Batiashvilli, Yuja Wang, and Deborah Voigt. Marlon has also participated as principal bass in the 2010 Fortissimo Fest in Sofia, Bulgaria with maestro Maxim Eshkenazy. Marlon is a jazz aficionado, composer and performer, and has been studying improvisation with renowned bassist and composer Stanley Clarke, since February 2006.
He played for American pop composer Burt Bacharach at the San Diego Embarcadero stage during the San Diego Symphony Summer Pops season on July 20, 2008. Marlon performed at the 2011 Idyllwild Jazz in the Pines Festival with the “Trio of Four.” He has played Los Angeles venues such as the Blue Whale, 2nd Street Jazz, Vitello’s Jazz & Supper Club, and will continue to expose his own compositions in clubs, recitals and festivals.