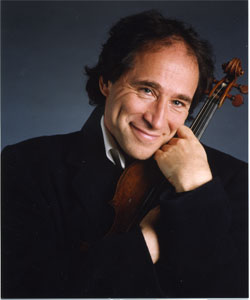 Canadian violinist Marc Destrubé is known for his exceptionally versatility; he appears as soloist, chamber musician, concertmaster or director/conductor of orchestras and divides his time between performances of the standard repertoire on modern instruments, and performing baroque and classical music on period instruments.

He has appeared as soloist and guest director with orchestras across North America, has been a regular guest with the Australian Brandenburg Orchestra and led the Belgian ensemble Anima Eterna in acclaimed recordings of the complete Mozart Piano Concertos. A founding member of the Tafelmusik Orchestra, he has appeared with many of the leading period-instrument orchestras in North America and Europe.

As concertmaster he has played under Sir Simon Rattle, Kent Nagano, Helmuth Rilling, Christopher Hogwood, Philippe Herreweghe, Gustav Leonhardt and Frans Brüggen. He is co-concertmaster of Brüggen’s Orchestra of the 18th Century, with whom he has toured the major concert halls and festivals of Europe, North America, Asia and Australia. He was concertmaster of the CBC Radio Orchestra from 1996 to 2002 and director of the Pacific Baroque Orchestra from its founding in 1991 until 2007. He remains artistic director of the Pacific Baroque Festival in Victoria.