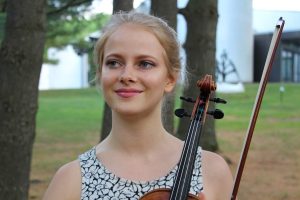 Originally from Powell River, Canada, Madeline Hocking is emerging as a dynamic performer and collaborator based in New York City. She has a passion for exploring all sounds, colours and effects that the violin has to offer, and enjoys working with electronics to reframe the sound of her instrument in new contexts. She also loves to partake in interdisciplinary projects, and to explore how artistic mediums can enhance each other in their different modes of expression – recent examples of such projects have included creating violin scores for contemporary short films ‘Blue Vice’ (a collaboration with chromic duo, BodySonnet, and Robert & Shana ParkeHarrison), and ‘Armour of Shells’ (with Lucy Yao, Gabe Katz, and The Joffrey Ballet School NYC). Improvisation has always been an important facet of music-making to Madeline, and she enjoys performing and composing pieces that utilize it; in November 2020 she co-wrote and performed a program of structured improvisation for percussion, violin and live electronics with Dániel Matei at the Kiscelli Museum in Budapest, Hungary.

Madeline holds a Bachelor of Music degree from the San Francisco Conservatory of Music, where she studied with Ian Swensen and Wei He. Other past teachers have included Eszter Haffner, Nicholas Wright, Mary Sokol-Brown, and Cathy Reckenberg. She has performed at music festivals with distinguished faculty and musicians from throughout the world, such as The Next Festival of Emerging Artists, 1:2:1, the Zodiac Festival, Banff Centre Masterclasses for Strings and Winds, the Orford Arts Centre, Bang on a Can, and the National Youth Orchestra of Canada. She has had the honour of soloing with the San Francisco Conservatory Orchestra and the Vancouver Philharmonic, and to have been the recipient of awards at numerous chamber music competitions throughout BC, including Vancouver Friends of Chamber Music and the BC Provincial Festival of Performing Arts. Madeline has also shown versatility in other genres; she played fiddle with Canadian bluegrass band ‘The Rakish Angles’ in 2018, is a former member of Sunshine Coast Celtic band ‘Ceilish’, and studied Hungarian folk music with Hungarian fiddle legend István Pál in 2020.

These days, Madeline is living and performing in New York City as a violinist of the critically-acclaimed Tactus ensemble of Manhattan School of Music’s Contemporary Performance Program, and is highly engaged in performing and writing music while she works towards a master’s degree under the private instruction of Curt Macomber. When not making music, she can be found reading, hiking in the mountains, or volunteering in her community.