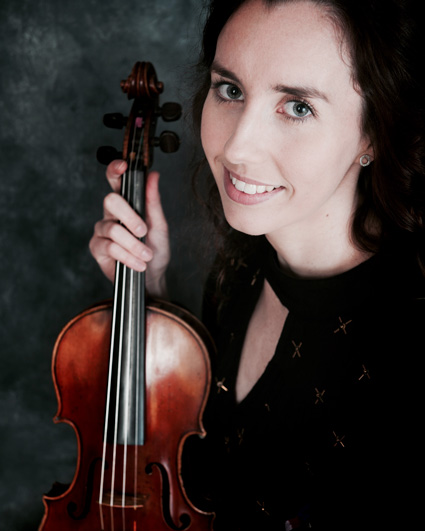 Irish violinist Jennifer Murphy is quickly gaining recognition as a creative and charismatic performer. She has performed at the Barbican Centre, London, The Four Seasons Centre for the Performing Arts, Toronto and the National Concert Hall, Ireland, and has had performances aired on BBC radio (UK) and CBC (Canada). She is the recipient of numerous awards, including the Glenn Gould School Concerto Competition, the Michael & Sonja Koerner Scholarship and the Arthur Catterall Concerto Competition. Recent solo engagements include a performance of Korngold Violin Concerto with Bramwell Tovey in Koerner Hall, Toronto, and Schnittke Concerto Grosso No.1 under the direction of Joel Sachs at the Banff Centre, Canada. Jennifer is currently based in Toronto, where she is a 2016-2017 Rebanks Family Fellow at the Royal Conservatory of Music.

Jennifer is a passionate chamber musician and, in the past year, has worked with David Geringas, Ernst Kovacic, Osvaldo Golijov and Barry Shiffman. She has spent her summers at The Banff Centre Masterclasses, the West Cork Chamber Music Festival, Domaine Forget Chamber Music Festival, Astona International Academy and Clandeboye Festival, where she was awarded the Ireland Fund for France Award by Camerata Ireland. In July 2016, she was invited to perform as a Fellowship Artist at the Music by the Sea Festival, B.C., where she collaborated with Steven Dann and Marc Ryser.

In June 2014, Ms. Murphy graduated from the Royal Academy of Music in London, where she was awarded a Master of Arts in Violin Performance with distinction, along with the prestigious Dip. RAM accolade. She completed her undergraduate studies at the Guildhall School of Music and Drama and recently received her Artist Diploma from the Glenn Gould School. Her principal teachers have included Erika Raum, Maurice Hasson and Detlef Hahn. She has taken part in masterclasses with many of the worlds most sought after musicians, including Maxim Vengerov, Thomas Brandis, Ilya Kaler, Daniel Hope, and the Belcea and Cremona Quartets.

Jennifer has served as concertmaster of the Royal Conservatory Orchestra under Gabor Takacs-Nagy and Leon Fleisher, and the Cross Border Orchestra of Ireland for performances in Carnegie Hall and Boston Symphony Hall. Jennifer plays on a beautiful Chanot violin, dated 1836, kindly on loan from The Royal Conservatory of Music, and is generously supported by the Arts Council of Ireland.