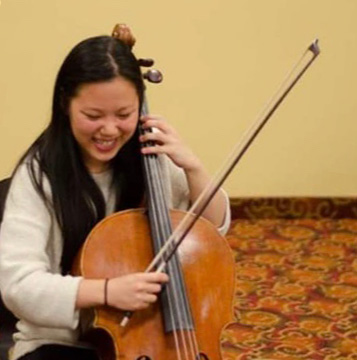 Canadian Cellist Kimberly Jeong actively performs in North America, Europe, and Asia. Jeong holds degrees from the Eastman School of Music, Yale School of Music, and the Royal Conservatory of the Hague. A recipient of the George Eastman Grant, Ms. Jeong was previously a student of Steven Doane at the Eastman School of Music. She has received mentorship from artists such as Pinchas Zukerman, Martin Beaver, Nicholas Mann, Michael Tree, as well as members of the Ying, Tokyo, Brentano, and Takács string quartet. She served as a member of Musica Nova and the Mannes American Composers Ensemble and has worked with composers such as John Adams, Hans Abrahamsen, John Harbison and Steven Stucky. Her performances have been broadcasted on Brava TV, CBC Radio, and BBC; performance venues include Avery Fisher Hall, De Nationale Opera, National Sawdust, Yale Center for the British Art, Società Dante Alighieri Vienna, Richard Bradshaw Amphitheatre, Koerner Hall, Arts and Letters Club, and Wigmore Hall. Jeong is a strong believer in arts education and has taught in several educational initiatives in the Rochester, New York area including Music for All and Sound Exchange. She also served as a Teaching Artist with the Yale Music in Schools Initiative. Jeong is interested in the interdisciplinary arts and communicating with new audiences through various mediums; she worked as a research assistant at the Yale Center for the British Art and has given performances in a special conjunction with exhibitions at the Yale University Art Gallery and the Yale Center for the British Art, as well as the Memorial Art Gallery in Rochester, New York. She is a co-founder of Harmony for Growth, a program that provides music lessons to mature adults in retirement homes. Currently, she is working on her Playing Circle Tour, organising and performing classical music concerts in various parts of Canada. www.kimberlyjeong.com