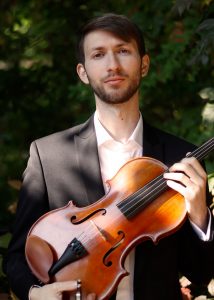 Born in 1995, Julien Altmann is a Toronto-based, French-American violist. Julien spent the early part of his life in California studying viola at the Crowden School of Music in Berkeley, CA as well as at UCLA’s Herb Alpert School of Music with acclaimed violist Richard O’Neill. In 2017, Julien moved to Canada to pursue his Master’s in Viola Performance under the tutelage of viola pedagogue André Roy at McGill University’s Schulich School of Music. He is currently in his second and final year at the Glenn Gould School of Music in Toronto, with Steven Dann.

Over the course of his career, Julien has had the fortune to perform professionally with many esteemed musicians. In his time in Los Angeles, Julien performed with violinist and professor Guillaume Sutre for a radio broadcast of Ravel’s String Quartet at the LACMA Museum. In 2013, Julien performed alongside professors Antonio Lysy and Movses Pogossian for a performance of Haydn’s String Quartet: the Seven Last Words in a benefit concert for the UCLA Chamber Music Program. In the second year of his master’s in Montreal, Julien was chosen to perform with members of the Schulich Faculty, Axel Strauss, Douglas McNabney, and Elizabeth Dolin, for a memorable performance of Tchaikovsky’s Souvenir de Florence at Redpath Hall. In December 2020, Julien looks forward to performing with members of the ARC ensemble, including Erika Raum, Marie Berard, and Steven Dann for a performance of Beethoven’s String Quintet in C Major.

In 2018, as part of the Piano Quartet Z4, won first place in the McGill Chamber Music Competition, and was awarded a trip to Beijing’s Central Conservatory for a residency and performance. Julien has also been invited to participate in various chamber music festivals throughout his career including Anssi Kartunen’s Creative Dialogue X in Santa Fe, NM, the LAMP Festival in Lunenburg, NS, Musique à Flaine in Flaine, France, Music By the Sea on Vancouver Island, and the Nice Academy in at the Nice Conservatory, France.

As well as being an established chamber musician, Julien has also performed professionally with orchestras like the Sherbrooke Symphony, The North Bay Symphony, and has led the viola sections of the UCLA Philharmonia, UCLA Opera, McGill Symphony, and Royal Conservatory Orchestra.

Outside of Classical Music, Julien is a prominent violist in the popular music recording industry. Julien has arranged strings and recorded viola for artists like Emmit Fenn, Billie Eilish, Michael Bolton, Mathilda Mann, Lolo, and Shallou, and has also performed at live concert venues like the Roxy on Sunset Blvd in Hollywood, and at the Coachella Music Festival with pop group Strangers You Know.