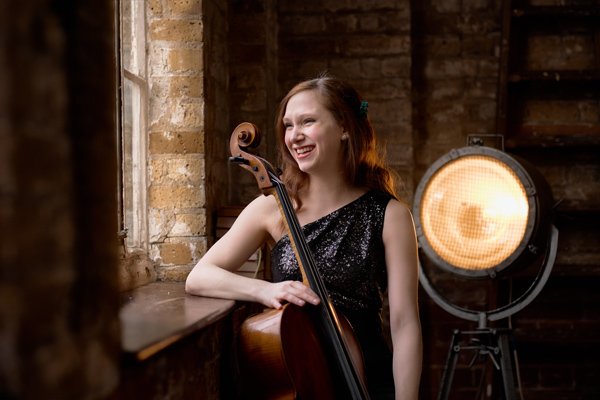 Dutch cellist Jobine Siekman, ‘Rising Star’ artist in the Dec-2020 issue of the BBC Music Magazine, is quickly building her career as an exceptional chamber musician and soloist. She was a prize winner at the Cellobiennale Amsterdam Competition 2016 and with ensembles like the Alkyona Quartet and the Chloé Trio. In 2019 she was awarded the Mills Williams Junior Fellowship supported by the Royal College of Music in London. Previously she completed a Bachelor degree there with first class Honours with professor Melissa Phelps and she obtained a Masters of Performance diploma with professor Richard Lester.

During the pandemic Jobine remained active as a performer and she was featured in the ‘In Focus’ film by the RCM performing the sixth Bach Suite and newly commissioned works on the ‘Amaryllis Fleming’-Amati cello piccolo. Previously she played the second Bach Suite at Wigmore Hall as part of the RCM String Showcase concert. BBC 3 broadcasted her performance of Webern’s 2 pieces for cello and piano. Jobine was awarded second prize in the Young Music Talent of the Year Competition (2011) and the Anna Shuttleworth Prize in the RCM cello competition (2016). In 2019 she appeared as soloist with the Simon Bolivar Orchestra in the Schumann concerto under baton of Jesus Uzcategui. Previously she has also performed the Shostakovich, Haydn, CPE Bach and Saint-Saëns cello concertos. Later this year Jobine will be releasing a digital single of Piazzolla’s Grand Tango in collaboration with pianist Matthew Lam, which was recorded at Abbey Road Studios.

Jobine is a passionate chamber musician and a member of several successful ensembles like the Chloé Trio, Alkyona Quartet, StringWood Ensemble and Delphine Trio with whom she performs regularly in the UK and the Netherlands. Highlights include solo and ensemble performances at the Concertgebouw Amsterdam, Wigmore Hall, Cadogan Hall, Elgar Room in Royal Albert Hall, Leith Hill Place, and the Stoller Hall in Manchester. In 2020 the Alkyona Quartet released their first digital album with music by Janáček and the following year they toured the Netherlands, Greece and Scotland. With the Chloe Trio she won the 2021 RPS Henderson Ensemble Prize and in 2022 they were selected as Kirckman Concert Trust Artists. Besides chamber music Jobine enjoys performing with the Ciconia Consort, a string orchestra from the Hague in which she leads the cello section. Jobine is co-founder of the StringWood Festival, organised in Katwijk (NL) and also acts as artistic advisor to the Huygens Festival. Jobine does not limit herself to the modern classical genre but also regularly performs in Latin-American band Quimantu and on baroque cello in ensembles and as a soloist.

She attended the Young Talent Class at the Royal Conservatory in The Hague from the age of 12, where she studied with Lucia Swarts and Dmitri Ferschtman. Jobine has also received lessons from Harro Ruijsenaars, Gary Hoffman, Johannes Goritzki, Frans Helmerson, Torleif Thedeen, Raphael Wallfisch and Anner Bylsma and Jean-Guihen Queyras. She has participated in the Schleswig Holstein Masterclasses, Holland Music Sessions, the Kronberg Academy cello masterclasses and Ticino Musica Festival.

Jobine plays a Lefèbvre cello from the 18th century that she generously has on loan from the National Instrument Foundation.