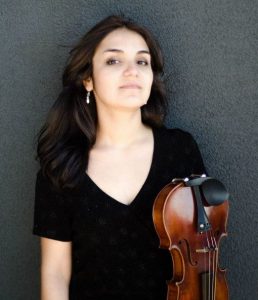 Praised by the El Diario de Concepción for her “warm and soulful sound,” Jeimmi Carrasco has moved audiences through her performances as a soloist, chamber artist and orchestral musician. She began her orchestral career at the National Youth Orchestra of Chile and worked as an assistant concertmaster and concertmaster for two years. Since then, Ms. Carrasco went on to play in many orchestras across Chile such as the Orquesta Filarmónica de Chile, the Orquesta Sinfónica de Chile and the Orquesta de Cámara de Valdivia. From 2013 to 2016, she held the principal second violin position at the Orchestra of the University of Concepción in addition to being the youngest member of the orchestra. In 2014, Ms. Carrasco was part of the prestigious Schleswig Holstein Musik Festival Orchestra in Germany, where she had the opportunity to work with artists such as Christoph Eschenbach, Daniel Müller, and Michael Sanderling, among many others. For three years she has been recipient of the Foundation Ibanez Atkinson for her artistic contribution to her home country, Chile. As the founder of the Adlibitum ensemble, which blends classical music and Latin music, Ms. Carrasco has performed in fifteen different cities in Chile. She completed her Bachelor’s degree and Artist Diploma at The Glenn Gould School of Music in the studio of Mayumi Seiler.