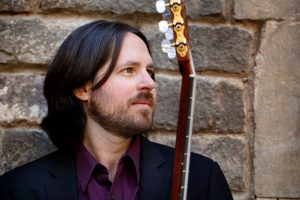 “He has it all—technique, musicianship, inventive programming … Even if you already have these pieces in other performances, Cordover’s have such a distinct and attractive personality that it will be worth finding.” (American Record Guide)

“[This performance] demonstrated how much poetry and feeling can be obtained from the guitar in the hands of master musicians such as Jacob Cordover … superbly played” (The Mercury, Australia)

In pre-COVID times, Australian classical guitarist Jacob Cordover enjoyed a varied and extensive international career as a concert and recording artist based out of his home in Barcelona, Spain. Highlights include the release of 8 CDs (4 as a soloist and 4 in duo, including 2 live recordings for the Association of Catalan Composers) as well as performances in festivals and concert series in over a dozen countries across 4 continents. With the interruptions in international travel, combined with limits on audience sizes, Mr. Cordover has since taken the opportunity to move to the countryside of Catalonia where he is focusing more on developing new musical projects, making recordings, and giving live, in-person concerts where possible.

Equally happy performing as a soloist, in small chamber ensembles, or in front of an orchestra, Mr. Cordover has performed in large concerts halls such as Barcelona’s Palau de la Música, Beijing’s Centennial Hall and the Cultural Centre of the Philippines’ Main Theatre, as well as more intimate venues such as the Rix Centre in Bamfield, Canada; Raynham House’s Ballroom in England’s Norfolk; and at Montsalvat, in Melbourne, Australia.

Comfortable performing a wide range of musical styles, Mr. Cordover actively programs music from the Baroque to contemporary; audiences are as familiar seeing him give world premieres as performing forgotten 19th century gems on period instruments. Critics have equally praised his performances of J.S. Bach and William Walton, saying “His interpretation of the Bach suite [BWV 997] is one of the finest I have heard to date with superb phrasing and total mastery of the technicalities involved in playing this difficult composition” (Classical Guitar Magazine) and “This is simply the finest performance of Walton’s Bagatelles [5 Bagatelles for solo guitar] I’ve encountered. I and V crackle with energy, and he realizes perfectly the range of moods and colours in this modern masterpiece” (American Record Guide).

His interest in contemporary music, coupled with a strong belief that classical music should not be static but rather forward-looking, has led Mr. Cordover to collaborate with numerous composers from Australia, Canada, Norway, Spain, the United Kingdom, and the USA. Mr. Cordover has premiered numerous works for solo guitar as well as a variety of chamber music combinations, including: the world premiere at the Palau de la Música in Barcelona of Adrià´s Confessions by Marion Budos; a new orchestral arrangement of Enrique Granados’ Valses Poéticos by Melani Mestre; the North American and Asian premieres of Leo Brouwer’s Baladas del Decameron Negro for guitar and string quartet; the world premiere of Canción Primera for solo guitar by Diego Corraliza; and the world premiere of Sepharad – a piece for prepared guitar and flute by Catalan composer Carles Guinovart – based on an old Sephardic melody and Jewish text as well as the fugal subject of J.S. Bach’s Fugue no 14 in F# minor.