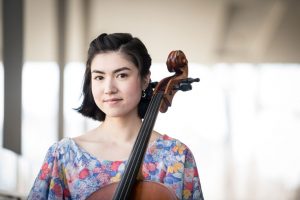 Hannah Craig considers it a very distinct privilege to be studying music during a time in which the world requires art with great desperation. Cello has been the crux of Hannah’s life for as long as she can remember, having been born into a family of great musical talent. Both of her parents teach at The Royal Conservatory, and prior to attending university she was a scholarship student under the tutelage of Joowon Kim and David Hetherington at The Conservatory’s Phil and Eli Taylor Performance Academy for Young Artists. In 2013, she began her undergraduate studies at McGill University in the studio of Matt Haimovitz. It was during these four years that her love for the cello and her appreciation for its versatility was greatly amplified. Hannah had the opportunity to be a member of UCCELLO, Haimovitz’s Grammy-nominated cello ensemble in which she performed jazz and rock as well as classical music. During the summer of 2016, Hannah was extremely fortunate to have been the only Canadian cellist invited to the Piatigorsky International Cello Festival as a Fellow. While acquiring her Artist Diploma at the Glenn Gould School, Hannah had the great privilege of studying with Desmond Hoebig, Andres Diaz and Hans Jorgen Jensen. It was during this time that she made her Koerner Hall debut under the baton of Bramwell Tovey. In the summer of 2019, Hannah was named one of CBC’s “30 hot Canadian classical musicians under 30”. She is now a tenured member of the Victoria Symphony and has been enjoying her first season immensely. Hannah Craig plays on a 1920 Bourguignon Belgian Cello, graciously handed down to her from her mother.