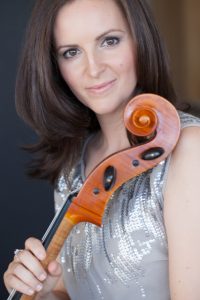 Emmanuelle Beaulieu Bergeron, the Associate Principal cellist of the Toronto Symphony Orchestra, enjoys a diverse career as a recitalist, chamber and orchestral musician, and teacher. She has performed as guest principal cellist with the National Arts Centre Orchestra and Les Violons du Roy.   An accomplished chamber musician, Emmanuelle is a member of the Tokai String Quartet. She has been invited to play in chamber festivals across Canada: Debut Atlantic in the maritimes; the Montreal Chamber Music Festival and Concerts aux Iles-du-Bic in Quebec; Sound at Parry Sound and Stratford Music Festival in Ontario; and Music-by-the-Sea and the Pender Harbour Music Festival in British Columbia.

As a teacher, Emmanuelle has collaborated with students at the Yellow Barn Young Artists Program in Vermont, Music at Port Milford, and at the Toronto Summer Music Festival. Emmanuelle’s teachers have included Denis Brott, Joel Krosnick, Bonie Hampton and Norman Fischer. She is a prizewinner of the Fishoff Chamber Music Competition, Prix d’Europe Competition, and Radio-Canada’s Young Artist Competition. She is a twice- awarded laureate of the Canada Council Bank of Instruments competition.

Emmanuelle was born in rural Quebec, grew up in Montreal, and currently lives in Toronto, where she listens to French radio every day often while eating cheese and baguette. She is a graduate of the Montreal Music Conservatory, the Juilliard School and Rice University.