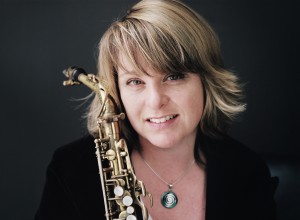 Montreal-based musician Christine Jensen has been described as, “an original voice on the international jazz scene… [and] one of Canada’s most compelling composers,” byMark Miller of the Globe and Mail. According to Greg Buium of Downbeat Magazine, “Jensen writes in three dimensions, with a quiet kind of authority that makes the many elements cohere. Wayne Shorter, Maria Schneider and Kenny Wheeler come to mind.” After a performance at the 2006 Montreal International Jazz Festival, Scott Yanow wrote, “She’s rapidly developing into a major force … as a player and as a writer.”

Jensen is equally at home performing in small and large ensemble settings. Her latest opus, Treelines-The Christine Jensen Jazz Orchestra on Justin-Time Records, won her the 2011 Juno Award for Contemporary Jazz Album of the Year, along with Quebec’s Opus Award for jazz recording of the year. Downbeat magazine described it as“…a stunning orchestral debut”****1/2 stars…
She recently performed at various jazz festivals across Canada as well as at Dizzy’s Jazz Club-Lincoln Center in New York with this ensemble.
Jensen’s formidable orchestra is the glistening sunlight, the tranquility and force of the ocean, and the majestic trees that her music imagines.”-Jazz Times

Jensen has previously released three small ensemble recordings: Collage (2000), A Shorter Distance(2002), and Look Left(2006), all on the Effendi label. Along with her sister, New York-based trumpeter Ingrid Jensen, and close friend and long-time musical cohort, Swedish pianist, Maggi Olin, she co-leads the group, Nordic Connect. They released their first joint effort in 2007 entitled Flurry and followed up in 2010 with Spirals. The group has toured Canada, the US and Scandinavia extensively over the past five years.

As an adjudicator, clinician, and instructor at McGill, she is influencing the next generation of composers and players. In her travels abroad, she has shared her love of music and invaluable experience with young jazz enthusiasts around the world, from Norway to Peru, Turkey to Montreal, and back home on the West Coast. She has always been active in jazz education, leading clinics and workshops and adjudicating.