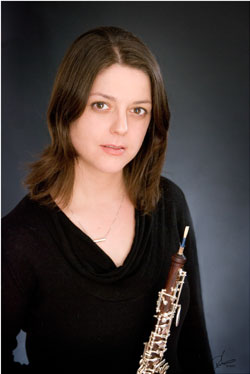 A diverse musician, Catherine Lee has performed extensively on the oboe and the English horn as a solo, chamber and orchestral musician.  In August 2008, she collaborated with POV dance, composing and performing the music for the production “Wet!” premiered at Ten Tiny Dances Waterfront Project (Portland, OR).

Catherine has an ongoing interest in virtuoso performer composers of the late eighteenth century. Specifically, she is interested in studying how these virtuosos infused the genre of the solo concerto with personal aspects of their compositional language which in turn created a resonance with their audiences. Her doctoral document “The Language of the Oboe Virtuoso in the Late Eighteenth Century” has been published in the IDRS Journal.

In October 2009, Catherine travelled to Singapore to present a lecture recital “Voices in Conversation:  An Oboist’s Exploration of the Oboe Works of J.C. Fischer (1738 – 1800)” at The Performer’s Voice: An International Forum for Music Performance and Scholarship.

Catherine’s other area of interest is in the study of somatics and the applications for musicians.  In this vein she trained as an Andover Educator, is certified to teach “What Every Musician needs to know about the Body”, and is currently training to be a Pilates instructor.