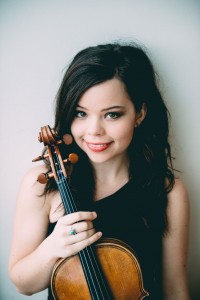 Catherine Gray is a Canadian violist who has performed throughout North America, (most recently with the TSO in Roy Thomson Hall and the OSM in La Maison Symphonique) Europe, and Asia, and has been heard on CBC Radio. Recently, Ms Gray traveled to the UK to tour with the Scottish Chamber Ensemble, including a performance at the Edinburgh International Festival and a live broadcast on BBC3. In 2013, Catherine was invited to India with the National Youth Orchestra of Canada to work with and mentor young Indian musicians. Ms Gray was also a recipient of the NYOC’s Award of Excellence Scholarship in 2012, one of six orchestra members to receive the award. Catherine has attended many top summer festivals including Morningside Music Bridge, Le Domaine Forget Chamber Music Program, St Lawrence String Quartet Seminar, The Banff Center for the Arts, and the National Arts Center Young Artists Program. In 2010, Catherine had her concerto debut and performed the Bartok Viola Concerto at the University of Calgary’s Rosza Center. She is currently pursuing her Master’s Degree at McGill University with Steven Dann after completing her Bachelor’s Degree at the Glenn Gould School in Toronto, and with Nick Pulos in Calgary, AB. Catherine is an enthusiastic athlete and is currently training for a marathon. She also enjoys hiking and road cycling.