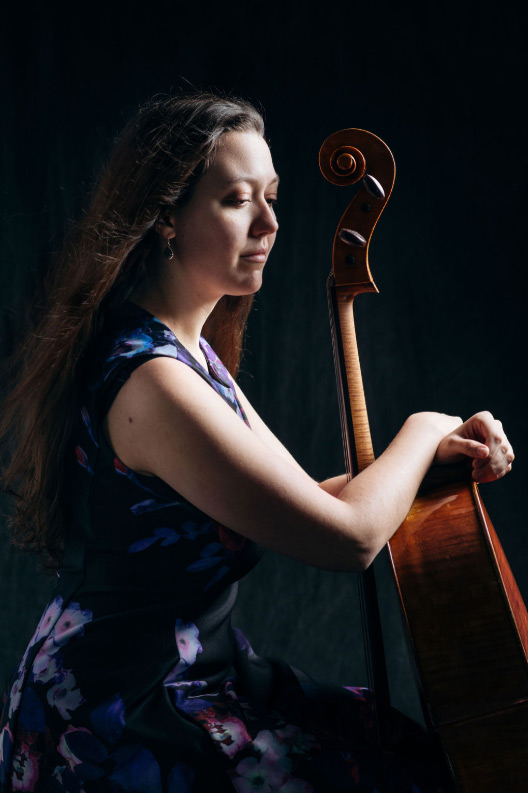 Canadian-Dutch cellist, Carmen Bruno is a multifaceted musician who is quickly establishing herself as one of Canada’s most versatile emerging artists. As a soloist, chamber musician, and orchestral player, she has performed across Europe and the Americas. Carmen spent her formative years in Amsterdam, the Netherlands, where she completed a bachelor’s degree from the Conservatory of Amsterdam in 2015. She is currently pursuing a doctoral degree at McGill University with professor Matt Haimovitz, where she also earned her master’s degree in 2017. As of the 2019-2020 season, she is a member of the Quebec Symphony Orchestra.

Carmen appeared on two Canadian albums in 2019; Duo Kalysta’s Origins, on which she was featured in the recording of Andre Jolivet’s Chant de Linos, as well as Yolanda Bruno (violin) and Isabelle David’s (piano) debut album, The Wild Swans. On this second album, Carmen recorded The Swan Parapraxis; a new commission by Ottawa-based composer Kelly-Marie Murphy alongside her sister, Yolanda. Besides performing, Carmen is becoming increasingly involved in the field of social justice and music education. Most notably, she recently completed a nine-month graduate certificate in social entrepreneurship, cultural agency, teaching artistry, civic leadership, and organizational management as a member of the 2018 Global Leaders Program cohort, which brought her to Panama and Chile.

With the SOMA string quartet, she has collaborated with composers in Italy and Canada, and offered numerous educational performances for young audiences. As an orchestral musician, Carmen toured the Caribbean in 2014 with the Youth Orchestra of the Americas and was invited to play as a featured soloist with the National Youth Orchestra of Canada on their nationwide tour the following year. Since 2019, she is a member of the Quebec Symphony Orchestra and freelances with the Montreal Symphony Orchestra and the Montreal Classical Orchestra. Carmen plays an Italian cello, 1884, made by Giuseppe Tarasconi in Milan, and an Emmanuel Bégin bow, graciously loaned to her by CANIMEX INC. from Drummondville (Quebec) Canada.