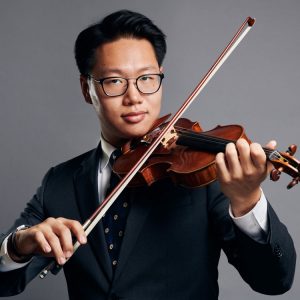 Originally from Seoul, Korea, violinist Byungchan Lee garnered international attention as prizewinner of the inaugural 2009 Yuri Yankelevitch International Violin Competition, and was one of Canadian Broadcasting Corporation’s “Next!” artists in 2016. He was subsequently selected as one of CBC’s “30 Hot Canadian Classical Musicians Under 30” in 2017. He appeared as a soloist with the McGill and Vancouver Symphony Orchestras, and performed alongside Stevie Wonder in Montreal as well as at the closing ceremony of the 2010 Vancouver Winter Olympics. Engagements have led to performances in most major halls across Canada, as well as in prominent venues around the world including Alice Tully, Carnegie and David Geffen Halls, the Museum of Modern Art, the Helsinki Music Center, and the Berwaldhallen in Stockholm. Recent highlights include performances with the Prairie Virtuosi (Saskatoon), a residency at the Avaloch Farm Music Institute, and chamber music performances with the Art of Time Ensemble (Toronto), Residence of the Japanese Ambassador (DC), Vancouver Chamber Music Society, The Forum (USVI), Robbie Collomore Series (CT), Shandelee Music Festival (NY), South Orange Performing Arts Center (NJ) and the Harvard Club of New York. He received the Sylva Gelber Music Foundation Award in 2017 and, during his undergraduate studies at McGill University’s Schulich School of Music, won the coveted $25,000 Golden Violin Award. He received his master’s degree from The Juilliard School where he was awarded a Benzaquen Career Advancement Grant. He was also invited to the Artist as Citizen conference in New York City, served as a Gluck Community Service fellow, and holds a lifetime Sylff fellowship. Byungchan plays on a 1869 J.B. Vuillaume violin and bow on loan from the Canada Council for the Arts Musical Instrument Bank. As of September 2019, he joined the Rebanks Family Fellowship and International Performance Residency Program at the Royal Conservatory of Music in Toronto.