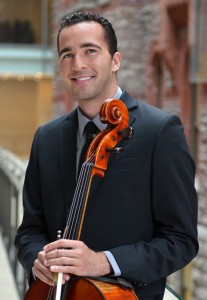 Canadian-American cellist Britton Riley enjoys a diverse musical career as a performer, teacher, and recording engineer. Before joining the Toronto Symphony Orchestra at the age of twenty-seven, he served as Assistant Principal Cello of the Calgary Philharmonic Orchestra and performed regularly with the Detroit and Toronto Symphony Orchestras. His performances have been recorded for film and radio by Sony Pictures, CBC Radio 2, Classical KUSC, and the DSO’s Live from Orchestra Hall series and live performances have brought him to Carnegie Hall, Boston Symphony Hall, Chicago’s Orchestra Hall, Walt Disney Concert Hall, Barcelona’s Palau de la Musica Catalana, and Temppeliaukio Church in Helsinki, among others.

After receiving a Bachelor of Music degree from the University of Southern California, he went on to earn his Master of Music and Doctorate degrees from the University of Michigan. There, he served as Richard Aaron’s teaching assistant and taught private lessons and studio class at the undergraduate and graduate levels, as well as courses in String Instrument Methods and Music Education. Following his graduation in 2014, he was named a Rebanks Fellow at The Royal Conservatory of Music in Toronto. In addition to maintaining a private teaching studio, he has coached young musicians at The Royal Conservatory of Music, Mount Royal University, Calgary Youth Orchestras, and the Alberta Youth Orchestra Symposium at the Banff Centre.

Mr. Riley has received recognition throughout North America in the National Foundation for the Advancement in the Arts Awards (now YoungArts), the Boston Symphony Orchestra’s Concerto Competition, the Eckhardt-Gramatte Competition, Sphinx Competition, and Hellam Competitions. He has performed at music festivals throughout North America and Europe, including the Banff Summer Music Festival, the New York String Orchestra Seminar, Le Domaine Forget Chamber Music Festival, Weimarer Meisterkurse, the St. Lawrence String Quartet Seminar, the Sunflower Music Festival, Bowdoin International Music Festival, and Encore School for Strings. He has a strong interest in collaborating with artists of various disciplines, especially dancers and photographers. Among his many interests, he enjoys traveling, nature, golf, cooking, hiking, and photography.