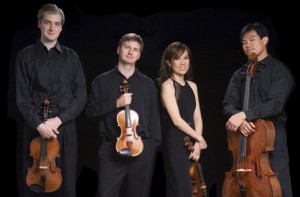 The Borealis String Quartet has created a sensation across Canada with its dynamic performances, passionate style, and refined musical interpretations.  Featured frequently on CBC Radio, the Borealis String Quartet has performed to critical acclaim and sold-out concert halls in every province.  In Ottawa, its National Arts Centre debt was broadcast by CBC’s “In Performance,” and its Montreal debut was a Gazette Critics’ Choice event.  The Quartet attracted further national attention as a finalist in the CBC “Great Canadian Music Dream” Competition, which was televised nationally.

Formed at the University of British Columbia in the fall of 2000, the Borealis String Quartet established a stellar reputation so quickly that its debut concert at the Chan Centre in Vancouver, was attended by more than a thousand people. Building quickly on that initial success, in 2003-2004 the Borealis played more than 70 concerts, traveling coast to coast on an extensive national tour generously supported by the Canada Council.  Highlights included performances of the Schubert Quintet with Sadao Harada, founding cellist of the Tokyo String Quartet, and the Mendelssohn Octet with the St. Lawrence String Quartet.  The Borealis made its New York City debut for Brooklyn Friends of Chamber Music in 2003. In 2004-2005, the Quartet returned to New York to perform for Schneider Concerts and made its first appearance for Music Toronto.

Already a favorite at Canadian festivals, the Quartet’s summer venues have included the Vancouver Chamber Music Festival, the Festival of the Sound in Ontario, the Indian River Festival on Prince Edward Island, and the Baies des Chaleurs Festival in New Brunswick.  In 2005, the Borealis made its first U.S. festival appearance at the Mendocino Music Festival in California.  The 2006-2007 season will be the Quartet’s first season of nationwide touring in the US, including performances on such acclaimed series as those of Duke University, the Tuscon Friends of Music, and the National Academy of Sciences in Washington DC.  Upcoming New York engagements include a return to Schneider Concerts, the Metropolitan Museum of Art, and Carnegie Hall.

In the summer of 2003, the Borealis was invited by the Emerson String Quartet to participate in the inaugural season of its Chamber Music Workshop at the State University of New York, Stony Brook. The Borealis String Quartet is currently Quartet-in-Residence at the University of British Columbia, where its members give master classes and teach chamber music in the School of Music.  In December, 2006, the Quartet received a sponsorship from the Chimei Culture Foundation of Taiwan, allowing them the use of four historic instruments: Giovanni Battista Rogeri violin Cremona, 1698, Lorenz Storioni violin Cremona, c. 1780, Pietro Giovanni Mantegazza viola Milano, 1791, Lorenz Storioni cello Cremona, 1778.