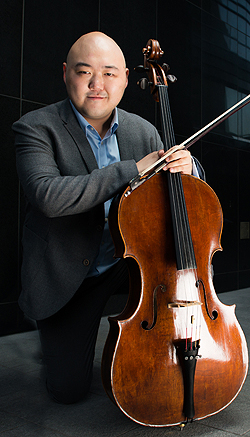 Mr. Choi has performed as soloist with numerous orchestras around the world including the Montreal Symphony Orchestra, Edmonton Symphony, the Okanagan Symphony, Calgary Civic Symphony, the Calgary Philharmonic, the Quebec Symphony Orchestra, the Shanghai Opera House Orchestra and the Schleswig-Holstein Festival Orchestra. At the age of 14, he gave his first solo recital tour in Mexico. Since then, he has given recital tours throughout North America as a soloist and chamber musician.
As a former member of the Janaki String Trio, Choi received the Grand Prize at the prestigious Coleman Chamber Music Competition and the Concert Artists Guild International Competition in 2006.

Mr. Choi studied with John Kadz at the Mount Royal College Conservatory in Calgary for twelve years before receiving his Bachelor of Music degree from the Colburn Conservatory in Los Angeles with Ronald Leonard in 2009. He also has his Masters of music degree and Artist Diploma from the Yale school of Music studying with Aldo Parisot. Currently, Choi is pursuing his Doctorate of Music degree at Stony Brook University under the tutelage of Colin Carr.