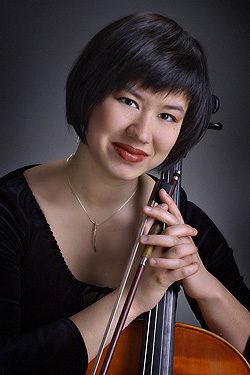 As a soloist, Alexandra is experienced in solo cello, cello and piano, and as a soloist with orchestra. Some of her notable performances are: the Casalmaggiore International Festival in Italy, where she was a featured soloist in the festival’s gala concert; featured recitalist in Barrie’s Colours of Music with pianist Charlene Biggs; and a featured soloist with the Sudbury Symphony Orchestra, under conductor Victor Sawa.

Some of her self-directed performances take her out of the concert hall and into unique performance venues; most recently, her recital in Vancouver BC at CocoaNymph chocolaterie.

In addition to a busy performance schedule, Alexandra is an active pedagogue. She has started two cello ensembles for adult amateur cellists, and continues to innovate to create exciting learning opportunities for her studio. As a member of the Silver Birch String Quartet (SBSQ), Alexandra was a featured mentor in the North Bay Symphony’s String Retreat for adult amateur musicians With the SBSQ, she performs often, in her home city of Sudbury and across Canada and the USA.

Her most recent accomplishments with the SBSQ include participating in the Chamber Music Seminars at Stanford University, by special invitation of the St. Lawrence Quartet, where she worked with such mentors as the SLSQ, Henk Guittart, Suren Bagratuni, and Tim Ying. In recording, the SBSQ’s collaborative CD with jazz pianist John Roney has gained acclaim and been nominated for both a Félix and a JUNO award.