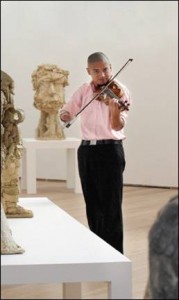 Canadian violinist Adrian Anantawan has established himself as one of the most dynamic young musicians of his generation. In the words of the Philadelphia Inquirer, “the hand is artifice, the talent quite real,” as he engages upon a career of international repute. His keen sense of expression and musicianship has continued to inspire both critics and audiences alike, beginning when he won the Rosemary Kennedy International Young Soloist Award in 2002.

Born of Thai-Chinese ethnicity, Anantawan began the violin at nine, and first toured with the National Youth Orchestra of Canada in 1999 and 2000. Following this was his acceptance to the Curtis Institute of Music in 2001, where he completed his bachelor degree under the tutelage of Ida Kavafian and Yumi Ninomiya Scott. It was here that he worked in depth with such artists as Joseph Silverstein, Pamela Frank, and members of the Guarnerius Quartet. During these years, Adrian also worked extensively with Pinchas Zukerman in Ottawa, and Itzhak Perlman on Shelter Island, NY and Sarasota.

Recent highlights included performances at the Official One Year Countdown Gala of the Vancouver 2010 Olympics, the White House; soloing with the Toronto Symphony Orchestra, the Montreal Chamber Orchestra, the McGill Chamber Orchestras, the Mississauga Symphony Orchestra and the National Academy Orchestra. He has also performed recitals in North America and abroad, including Weill Recital Hall at Carnagie Hall, the Kennedy Center, the Glenn Gould Studio, and the Aspen Music Festival. He was nominated for a Juno for his work on the children’s album, “A Butterfly in Time” Marco Polo Records.

Adrian is very active in Canadian media, including CBC, CTV, and most major newspapers. A 2008 Terry Fox Hall of Fame Inductee, Adrian is a key supporter of the disabled arts, as he was born without a right hand. He is a national spokesperson for the War Amps of Canada, and the Bloorview Kids Rehab Center. His proudest moments have included performances for the late Christopher Reeves and Pope John Paul II, and representing the Canada Cultural Showcase at the 2004 Summer Games in Athens.

The documentary by ZAP Production “Adrian Anantawan: The Story Behind the Notes” was premiered by CBC on June 30, 2008 and by Bravo on Feb 15, 2009. The TV Guide chose the documentary as a top pick of the week and called Adrian’s performance “as being touched by greatness”.