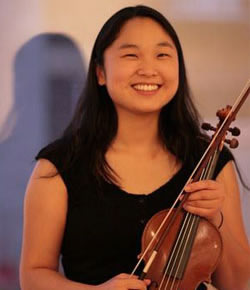 Elizabeth Choi is a versatile violinist who enjoys playing in every ensemble imaginable.As a chamber musician, Elizabeth won 1st and 3rd prizes at the Fischoff National Chamber Music Competition.

As a native from Chicago, Elizabeth received her undergraduate studies at Depaul University as a violin performance major in the studio of Mark Zinger and her graduate studies as a chamber music major in the studio of Ian Swensen. She has performed in every major venue in her hometown including Symphony Center’s Orchestra Hall, Lyric Opera House, Ravinia, Pritzker Pavilion, Harris Theater, and live on WFMT.

Currently, Elizabeth is a member of the Advent Chamber Orchestra, New Millenium Orchestra, International Chamber Artists, Accessible Contemporary Music, and is co-founder of the Navitas Ensemble. She is a faculty member at the 1st Conservatory of La Grange and the Chicago Center School of Music.