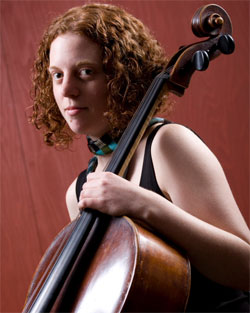 San Francisco-based cellist, producer, innovator and educator, Hannah Addario-Berry was born in British Columbia and has been living and breathing music since the age of nine. Passionate about bringing music to audiences in a wide array of mediums and venues, she is a sought-after soloist, chamber musician, and teacher, as well as founder and artistic director of two popular Bay Area music series, Cello Bazaar and Locaphonic.

An avid and versatile chamber musician, Hannah performs regularly with many ensembles, including the San Francisco Chamber Orchestra, Ensemble Parallèle, and Zoco Ensemble.  From 2006-2010 she was cellist with the renowned Del Sol String Quartet, during which time the quartet performed more than 50 world premieres, played in such venues as the Library of Congress and National Gallery of Art in Washington, Symphony Space in New York, and the Lensic Theater in Santa Fe, created large-scale intermedia collaborations such as GARDEN, Stringwreck, Divide Light, and Ghost Opera, and recorded two highly acclaimed albums, “Ring of Fire- Music from the Pacific Rim” and “First Life- String Quartets of Marc Blitzstein”.

A fierce advocate of the music of today, Hannah has been a core member of contemporary music ensembles in Montreal and San Francisco and has worked with many of the great composers of the 21st century, including Peter Sculthorpe, Per Norgard, Kui Dong, Helmut Lachenmann, Chou Wen-Chung, Chinary Ung, Pawel Mykietyn.  In March of 2006, she was a featured soloist in the Blueprint New Music series for the American premiere of Brian Cherney’s cello concerto “Apparitions”.  She recently recorded an album of music for solo cello by the Canadian composer Stephen Brown.