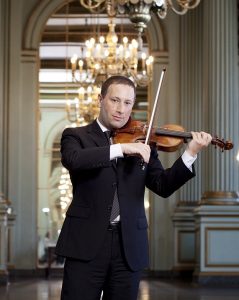 Tom Stone was born in Chicago where he studied music with Hilel Kagan.  At age 16 he attended Tanglewood where he coached with Eugene Lehner of the Kolisch Quartet and played in an orchestra under the direction of Leonard Bernstein. After this experience his focus on music became increasingly intense. Mr. Stone went on to pursue musical studies at the Eastman School of Music and the Cleveland Institute of Music.  His major teachers have included Donald Weilerstein, Zvi Zeitlin, Gyorgy Sebok, and Bonnie Hampton. Mr. Stone has also performed in masterclasses for Issac Stern and members of the Amadeus, Emerson, Juilliard Quartets and LaSalle Quartets. He has performed with many distinguished artists including Awadagin Pratt, Leon Fleisher, Zuill Bailey, Jon Nakamatsu, Ian Hobson, and Donald Weilerstein.

During his 20 years as a founding member of the Cypress String Quartet, Mr. Stone performed in major musical venues all over the world including the Kennedy Center, Library of Congress and the Ravinia Festival.  He also commissioned and premiered works by George Tsontakis, Jennifer Higdon, Benjamin Lees, Philippe Hersant and Elena Ruehr.

Mr. Stone has served as artistic director of the Centrum Chamber Music Festival and has worked closely with educational and arts organizations throughout the country to conceptualize and implement some of the nation’s most innovative educational programs. He has also served as treasurer of the San Francisco Friends of Chamber Music, board member of Chamber Music America, and panelist for the San Francisco Arts Commission. Mr. Stone plays on a violin made in Cremona, Italy by Carlos Bergonzi in 1734.