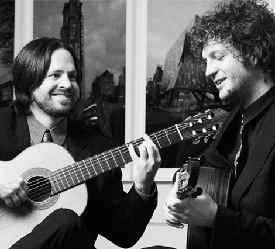 The Australian Guitar Duo is becoming recognised as one of the most dynamic and exciting guitar ensembles. The duo has performed throughout the world, including at the New York Guitar Duo Festival in New York City, Project Cancion Española in Spain, Festival de Musique Classique in France, Meadowlark Music Festival in Nebraska, and numerous major cities throughout their native Australia.

Performing a mixture of contemporary Australian compositions and standard works from the guitar duo repertoire, The Australian Guitar Duo consists of Rupert Boyd and Jacob Cordover, respected soloists in their own right. They met and formed as a duo in the year 2000 while undertaking studies at the Australian National University School of Music, where they studied with renowned Australian guitarist Timothy Kain.

Mr. Boyd and Mr. Cordover both play hand-made Australian guitars, and in March 2012 are undertaking a national tour of Australia to release their debut CD Songs from the Forest.