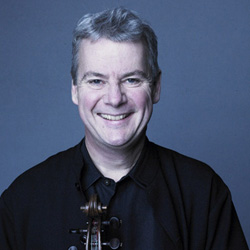 Steven Dann’s career has covered a wealth of violistic possibilities. As principal viola of some of the world’s leading orchestras, as a veteran of the string quartet and chamber music world, as soloist and recitalist and as a dedicated teacher, Mr. Dann has left all the doors open.

Mr. Dann was born in Vancouver, Canada, in 1953. His foremost teacher and mentor was the late Lorand Fenyves. Other influences include William Primrose, Robert Pikler and Bruno Giuranna and five summers spent studying the string quartet repertoire with Zoltan Szekely and members of the Hungarian String Quartet.

Steven Dann has collaborated as a soloist with such Maestri as Sir Andrew Davis, Rudolph Barshai, Jiri Belohlavek, Sir John Elliott Gardiner, Jukka-Pekka Saraste and Vladimir Ashkenazy. Since 1990 Mr. Dann has been a member of the Smithsonian Chamber Players in Washington D.C. and was a founding member of the Axelrod String Quartet.