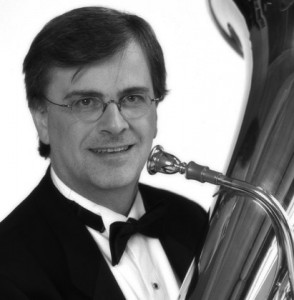 Scott Irvine is a Toronto-based tuba player and composer. In 1984, he joined the Canadian Opera Company Orchestra, a position he continues to hold today, and he is also a founding member of the renowned True North Brass. Scott played with the Hannaford Street Silver Band for over twenty years, and is principal tuba of the Esprit Orchestra.

In 1978, Scott began composition lessons with Dr. Samuel Dolin at the Royal Conservatory of Music, and since that time has developed a parallel career as a composer and arranger. He has received commissioning grants from the Ontario Arts Council, the Laidlaw Foundation, and the CBC, and is an Associate Composer of the Canadian Music Centre and a member of the Canadian League of Composers.

Many of his works and arrangements have been recorded for commercial release on a variety of record labels and have been performed by a number of artists, including True North Brass, the Hannaford Street Silver Band, Joan Watson, Jack Grunsky, the Canadian Chamber Ensemble, and chamber groups from the renowned Berlin Philharmonic.