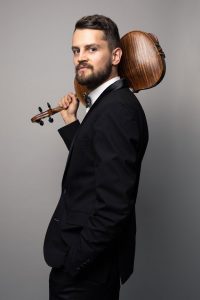 Hailed as a “lovely violist” (The WholeNote magazine), Ryan Davis is swiftly emerging as a sought-after artist in orchestral, chamber music and solo performances. Born in Canberra, Australia, but raised in Saskatoon, Saskatchewan, Canada, Mr. Davis is currently based in Toronto. Ryan was chosen as the principal violist of the Colburn Orchestra’s 2018 tour to Scotland and Ireland as part of the Edinburgh Festival. Mr. Davis was also selected by the Lucerne Festival Academy Orchestra as their principal violist for the 2017 summer festival, featuring performances in the Kölner Philharmonie and Elbphilharmonie Hamburg. Festivals include the Banff Center for the Arts, Orford Arts Center, McGill International String Quartet Academy, Festival Napa Valley, Ritornello Chamber Music Festival, and the Toronto Summer Music Festival. Ryan is an innovative performer under the moniker Little King, fusing elements of classical, folk, electronic, and hip-hop music with a loop pedal, and has had his compositions featured on ABC Channel 7 News LA. Ryan graduated as an Artist Diploma candidate at the Colburn Conservatory of Music under the tutelage of Paul Coletti in 2019. He completed a Master of Music degree in 2016 at the Yale School of Music as a student of Ettore Causa, and in 2014 completed a Bachelor of Music degree at McGill University, graduating with “Outstanding Achievement in Viola” as a scholarship student of Andre Roy. Under the guidance of Steven Dann and Barry Shiffman, Ryan is the first ever violist to be selected as a Rebanks Fellow, in the Rebanks Family Fellowship and International Performance Residency Program in Toronto.