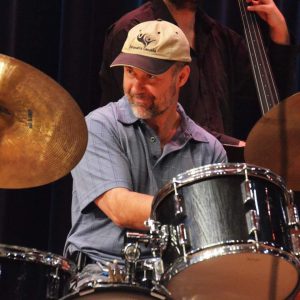 Rudy Petschauer was born in Vancouver B.C. in 1958   and started accordian at age 7 switched to drums at age 14.   He attended Eric Hamber Secondary School and became involved in the music program there and also as a percussionist in the Vancouver Youth Orchestra where he met Renee Rosnes who was a violinist at that time.    Upon graduation Rudy moved to Portland Oregon and was a music major at Mount Hood College. He started playing drums professionally in Portland and dropped out of school to play gigs.      In 1979 Rudy returned to Vancouver and became a member of saxophonist Fraser MacPherson’s quartet where he was mentored by guitarist Oliver Gannon. They had a 6 night a week steady engagement for 3 years which also included live broadcasts on CJAZ and CBC engagements.    When the engagement with Fraser ended in 1983 Rudy became a member of the Renee Rosnes Trio and played a year and a half steady engagement with her at the Hyatt Hotel in Vancouver.    At this same time Rudy and Renee worked every week with saxophonist Roy Reynolds and every weekend at Afterhours jazz club Basin Street which Rudy also booked for 4 years.   From 1979 to 1985 Rudy was arguably the busiest jazz drummer in Vancouver and also backed up people like Lew Tabackin, Herb Ellis, Tal Farlow, Lenny Breau, John Handy and Joe Pass when they came to town.   In spring of 1985 Rudy moved to New York at the same time as Renee Rosnes as they had both received Canada Council Grants to live there.    Since that time Rudy has spent most of his time in New York or on the road. He started a decade long association with Organist Jack McDuff as his drummer and made 5 records with him on the Concord label. He has also appeared at most of the Jazz Clubs and Festivals in the world. Over the years Rudy has worked with many of the people active on the NYC jazz scene such as Renee Rosnes, David Fathead Newman, Lou Donaldson, James Moody, Slide Hampton and Jimmy Heath, Jerry Weldon and Joe Magnarelli.    Rudy is also a part of the resurgent Soul/Funk movement in Brooklyn and as such has recorded on the Daptone Record Label with The Sugarman 3 and toured with Sharon Jones and Lee Fields.   His Big Band experience includes touring the world from 1993-1995 with the Glenn Miller Orchestra and a 15 year engagement with The Howard Williams Orchestra in Greenwich Village. For the last 11 years Rudy has been a member of the Tommy Dorsey Orchestra and has recently done tours of Australia and New Zealand with that group as well as numerous Big Band Cruises, Concerts and Festivals.    Although not in Canada as much as he would like to be Rudy still retains strong ties to Vancouver and has played either the Jazz Festival there or the Cellar Jazz Club many times with people like John Hart, Diana Krall, Renee Rosnes, PJ Perry.    Currently Rudy divides his time between Brooklyn and Pennsylvania where his 5 children reside.