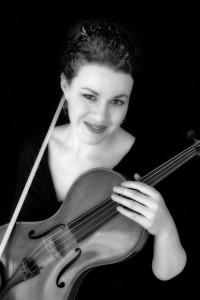 Canadian violist Ronelle Schaufele is an active solo, chamber, and orchestral musician who performs frequently throughout Western Canada. She recently performed at the 27th annual Euro Festival in Leipzig, Germany as both a soloist and chamber musician and completed an Artist in Residency program at The Banff Centre.

Some of Ms. Schaufele’s upcoming events include a recording of a work written by Canadian Composer Emilie LeBel. As a chamber musician Ms. Schaufele has performed in the Windy Mountain Music Festival with Rivka Golani, James Campbell, Gil Sharon, and Cory Cerovsek, which was recorded and broadcasted by CBC.  In addition, she recently performed as a guest artist with the Red Deer Symphony String Quartet, Alain Trudel in the Millennium Music Foundation Series, and with the Amadeus String Quartet.

Her education includes a Music Performance Diploma from Mount Royal College with William van der Sloot, a Bachelor of Music with distinction from the University of Calgary, studying viola with Nicholas Pulos and an Artist Diploma at The Glenn Gould School studying with Steven Dann. Ronelle Schaufele has been fortunate to work with many renowned musicians including Simon Streatfeild, Gerald Stanick, Daniel Panner, Samual Rhodes, Henk Guittart, and Steven Tenenbom.