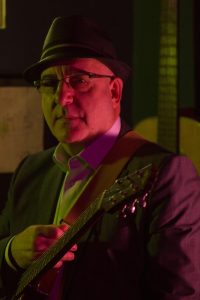 ROBERT (ROB) PILTCH (guitarist, composer) was born on December 25, 1956 in Toronto, Ontario, Canada. After early study with several leading music teachers including Eli Kassner, Gordon Delamont and Sam Dolin, he began playing in bands professionally at the age of 17, his late father’s Bernie Piltch Quartet among them. He joined the famed Blood, Sweat, and Tears in 1979, touring North America and recording with them for the next two years.

Returning to Toronto, he settled into a busy career as a session player, working in various musical genres with Canadian artists including Hugh Marsh, Kim Mitchell, Shirley Eikhardt, Marc Jordan, Guido Basso, and Rob McConnell. In the early ‘80s he released his debut album, Bells (Umbrella Records) in partnership with Canadian jazz virtuoso Don Thompson, and followed it in 1988 with a self-titled solo album (Rob Piltch) for Duke Street Records. Both recordings include several of his own compositions.

Rob Piltch appears as both a soloist and sideman on many recordings by other leading musicians, and has played guitar on numerous television shows. He was also featured on the sound tracks of major feature films ‘Crash’ and ‘The Blue Planet’. He is one of the remaining original members of the band Nick Buzz who recently released their second recording.

He performed in a total of seven “Sound of Toronto Jazz” Concerts at the Ontario Science Centre between 1978 and 2004 with artists and ensembles including the Rob Piltch/Mike Malone Duo, Emilie-Claire Barlow, the Kathryn Moses Quartet, the Dave Young/Phil Dwyer Quartet, the Glen Hall Octet, The Barlow Group, and the Alastair Kay Quartet.