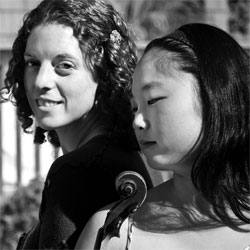 The Navitas Ensemble is dedicated to presenting the duo ensemble and repertoire as an integral part of chamber music. We bring to our rehearsals a depth of exploration, integrity and curiosity, which allows us to present to our audience music-making that is dynamic, intimate, and powerful.

Navitas was formed by violinist Elizabeth Choi and cellist Hannah Addario-Berry, who began playing together in 2004 while they were both completing graduate studies in the esteemed chamber music program at the San Francisco Conservatory of Music.

Though Addario-Berry and Choi have performed together in ensembles large and small, their decision to form a duo was largely inspired by their shared experience of Ravel’s great Sonata for Violin and Cello, through which they developed a deep mutual respect and discovered their shared passion and commitment to bringing the highest level of artistry and expression to great works of chamber music.

Both musicians bring to the ensemble extensive backgrounds in contemporary music and traditional concert music, drawing connections between these worlds to create programs that are diverse, entertaining, and relevant to audiences of all ages and backgrounds. Navitas has performed in venues across the US, including Asian Art Museum of San Francisco, Music Institute of Chicago, San Francisco Conservatory of Music, Red Poppy Art House, Community Music Center of San Francisco, and the Legion of Honor.

The Navitas Ensemble regularly seeks out and attracts great collaborators of many genres, as well as composers who write new works for the ensemble. They have been joined by members of Adorno Ensemble, Anaphora Ensemble, Corky Seigel’s Chamber Blues, Ensemble Parallèle, indy-rock band Sanawon, and bass-clarinet duo Sqwonk.