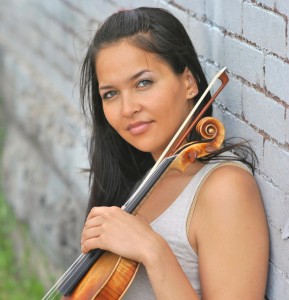 Meredith Riley is currently receiving her second Advanced Music Studies certificate at Carnegie Mellon University under the tutelage of Andres Cardenes. She received a Bachelors in Music in 2012 after studying violin performance with Brian Lewis at the University of Texas. Meredith recently auditioned for both Canton Symphony and the Erie Philharmonic in the fall of 2014 and won first violin section spots in both orchestras. Her performance awards include receiving the prestigious Diversity Fellowship from the University of Texas in 2012 for an Artist Diploma degree at University of Texas. Riley was also the winner of the UTSO competition in 2011, a finalist in the Young Texas Artist competition in 2011, a semi-finalist in the Crescendo music awards in 2010, and a recipient of the Starling scholarship for study at Seattle Conservatory during her senior year of high school. Among other awards, Riley was a junior semi-finalist in 2007 and 2008 National Sphinx Competitions for African American and Latino String players, and has made solo appearances with the Cayuga Chamber Orchestra, Syracuse Symphony Or-chestra, New England String Orchestra in addition to the University of Texas Symphony Orches-tras. In June 2009, she was selected as a Young Artist for the Starling Delay Symposium at the Juilliard School. Meredith’s summer festival experiences includes Encore School for Strings, Heifetz International Music Festival, Chautauqua MSFO, the International Music Academy of Plzen in Czech Republic, MIMU festival in Uberlandia, Brazil, Sunflower Music Festival, Do-maine Forget’s intensive chamber music program, and Steamboat Strings Music Festival. Riley has also been in a capella vocal ensembles, jazz ensembles, musical theater, and recently has collaborated with several bands in the cities of Austin and Brooklyn.