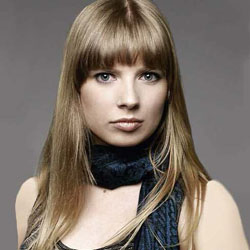 Internationally acclaimed French-Canadian violinist Luanne Homzy is highly soughtafter for her technical facility, sensitive musicality and broad versatility. She has brought home First Prizes in international and national competitions and has performed concerti with orchestras such as the Montréal Symphony Orchestra, the Hamburg Symphony Orchestra and the Colburn Chamber Orchestra. Having served as concertmaster for the ,Colburn Orchestra, the American Youth Orchestra and the National Youth Orchestra of Canada, she has worked closely with masters such as Sir Neville Mariner, Gustavo Dudamel, Kent Nagano and John Williams.

As a founding member of the Saguaro Piano Trio —First Prize winner of the International Chamber Music Competition Hamburg in 2009 — she has toured Germany, New Zealand, Australia, the USA, Canada and Japan. She has recorded a full-length album with the Saguaro Trio, live solo recitals and studio sessions for Radio-Canada and has been a recurring musician on Fox’s hit series “Glee”. Ms. Homzy is based in Los Angeles. She studied with Robert Lipsett on a full scholarship at the prestigious Colburn Conservatory in Los Angeles and later obtained her Masters from the Hamburg Hochschule in Germany.