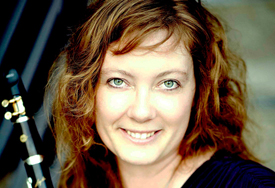 An accomplished classical and contemporary clarinetist, Krista Martynes has performed with Orchestre des Régions Européennes, and the 19th International Sacred Music Festival at the Abbaye de Sylvanes. Krista has been a featured composer, performed the works of such composers as Georges Aperghis, Pascal Dusapin, Gerard Pesson, Wolfgang Rhim, and Jorg Widmann.
Krista has premiered major works at the Maison de la Musique in Nanterre and at the Theatre de Nantes, in France. She has also performed at the Musikprotokoll and Transart Festival in Italy, and the Klangspuren Festival in Austria. Her video commission from New Adventures in Sound Art (NAISA), will be featured in the Sound Play Festival in Toronto.
Krista worked with the Germany’s Experimental Studio des SWR under the direction of Andre Richard, performing and participating in a documentary on the music of Luigi Nono. She was also involved with members of the Instant Composers Pool with the Magpie Music and Dance Company in Amsterdam.
She has performed with the Baila Loca Dance Company in Rotterdam, and with the DesiDela dance company in Paris. Krista has recently performed with sound artist Alexis O’Hara and video artist Dayna McLeod in the Edgy Women Festival in Montreal.