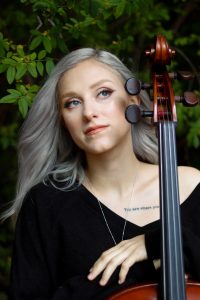 Kendra Grittani is an experienced young cellist, having started playing at four years old. Kendra has completed her Masters in cello performance at McGill University’s Schulich School of Music, with accomplished symphonic and chamber musician, and cello professor, Elizabeth Dolin.

After forming the piano trio, Trio Meira, the chamber group swept the McGill Chamber Music Competition 2018, being awarded 1st prize. Along with a debut performance in Montreal, Trio Meira was awarded a week-long residency at the Mozarteum in Salzburg, Austria.

Kendra continues to further her career as a chamber musician, performing in the recently formed ensemble, Duo Thalia with violinist Xueao Yang in both Toronto and Montreal. She has also had the immense privilege of performing at various chamber music festivals, including but not limited to the Montreal Chamber Music Festival, the Zodiac Music Festival, Les Jeunes Virtuoses de Montréal, and Music By the Sea in Victoria, BC.