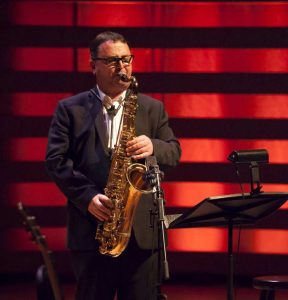 A multiple Juno award winner and nominee, Toronto-based saxophonist Kelly Jefferson has a Bachelor of Music degree from McGill University in Montreal and a master’s degree from Manhattan School of Music in New York City.

Kelly has toured extensively in Canada, the United States, Japan, South America, Thailand, Europe, South Korea and China, including a nine-month tour in 2000 as the tenor saxophonist with legendary trumpeter Maynard Ferguson.

The Kelly Jefferson Quartet release Next Exit, was nominated for a 2011 Juno Award for Contemporary Jazz Album of the Year. Kelly was also a five-time nominee for Saxophonist of the Year by the National Jazz Awards. Kelly is presently on faculty at The University of Toronto and York University where he teaches saxophone, small ensembles, jazz theory, ear training and improvisation, with previous teaching positions at Humber College in Toronto and McGill University in Montreal.

Mr. Jefferson has also adjudicated at music festivals across Canada and has given numerous workshops throughout Canada, the United States and China.

Kelly is a Yanagisawa saxophone artist.